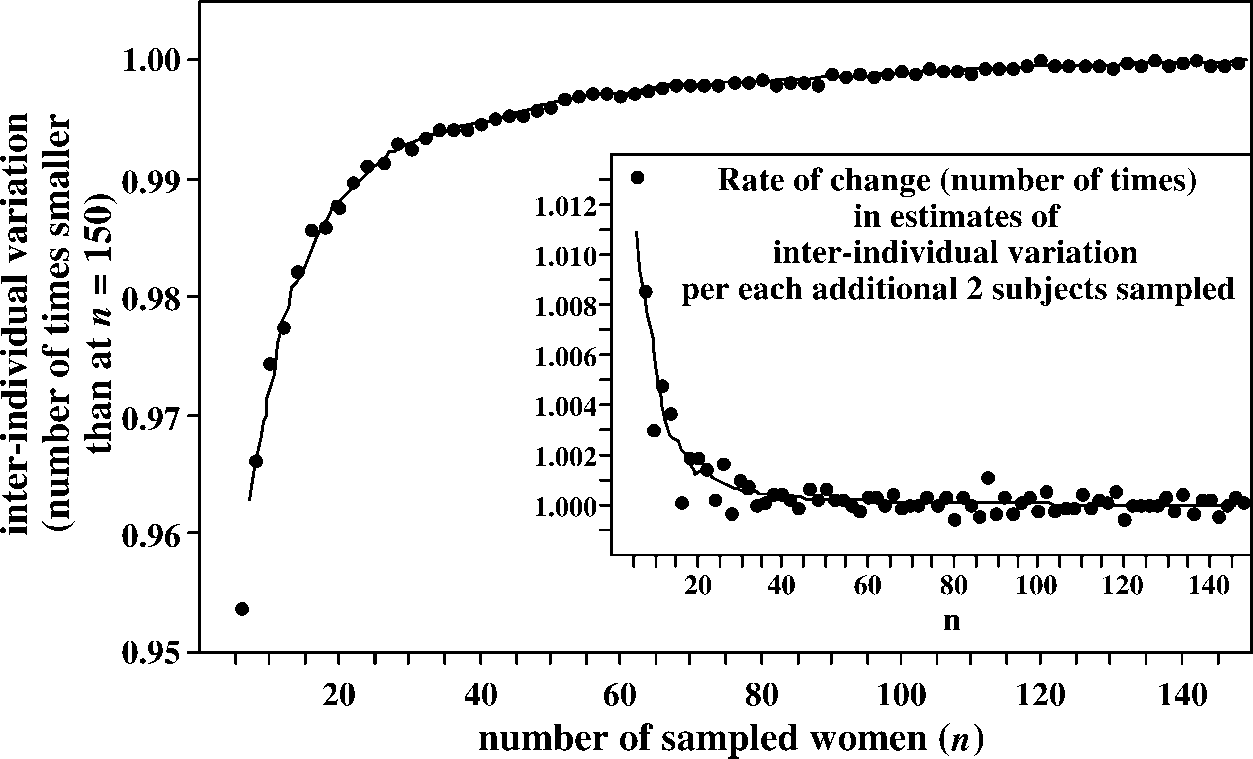 Interindividual variation among 22 women (ranked according to the mean progesterone level of each woman) and intercycle variation (among cycles of each woman). Each dot represents mean value (computed from untransformed data) of a single cycle of the luteal-phase (days Interindividual variation increases asymptotically as a function of the number of subjects in the study. The inset shows that estimates of interindividual variation change initially with each additional 2 women sampled, but sampling more subjects than n ¼ 20 yields only mar- ginal changes in the estimates of interindividual variation.
(the use of which could result in artifactually high values (days À11 to À6), the interindividual and intercycle com- of amplitude), we also computed amplitudes only for days ponents of variance become, 55 and 45%, respectively À12 through À3 of the luteal phase (one cycle had a mini- mum concentration of zero on one of the days and wasexcluded).
Partitioning the interindividual and intercycle If there is only one cycle proﬁle reliably evaluated for each woman, the average CV among 20 subjects’ proges- Two sources of natural variation in progesterone con- terone means is about 99% of that calculated among n ¼ centrations, i.e., differences among women (interindi- 150 subjects, while a sample of six women reaches 95% vidual) and differences among cycles of individual women (Fig. 2). However, if cycle means are based on incomplete (intercycle), had each highly statistically signiﬁcant and hormonal proﬁles (see below), this fact affects the neces- very similar contributions to the overall observed varia- sary sample size for the number of subjects. Further, with tion in the data. Expressed relative to each other, i.e., each subject measured, the interindividual variability (as without taking into account the residual (intracycle) vari- a measure of both biological variation and sampling varia- ation, the interindividual level accounted for 46%, and the tion) increases at a declining rate. Beyond the sample size intercycle (within-women) level accounted for 54% of vari- of 20–25 subjects, each additional two women measured ation, with overlapping 95% conﬁdence limits for variance contributed a similar fraction to the precision of the analy- components (Figs. 1 and 6D; Table 2). When the analysis sis. In other words, the gains from increasing sample size is performed only on the data from the mid-luteal phase are substantial for samples of up to 20 women.
American Journal of Human Biology DOI 10.1002/ajhb 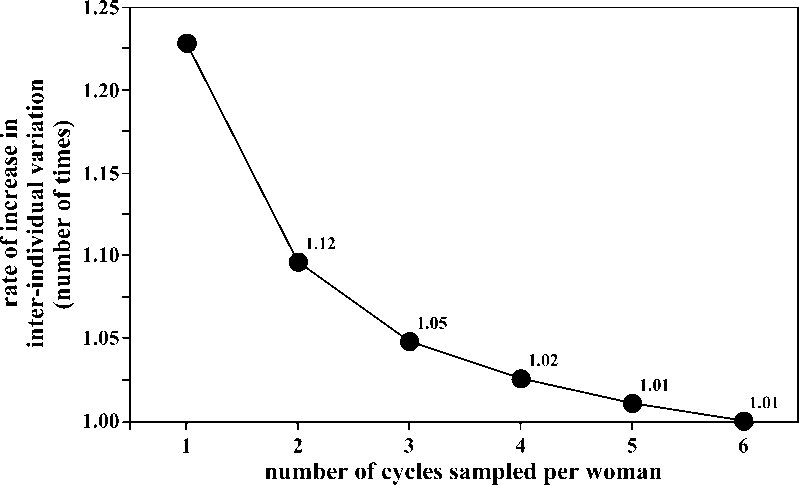 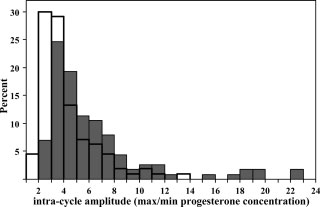 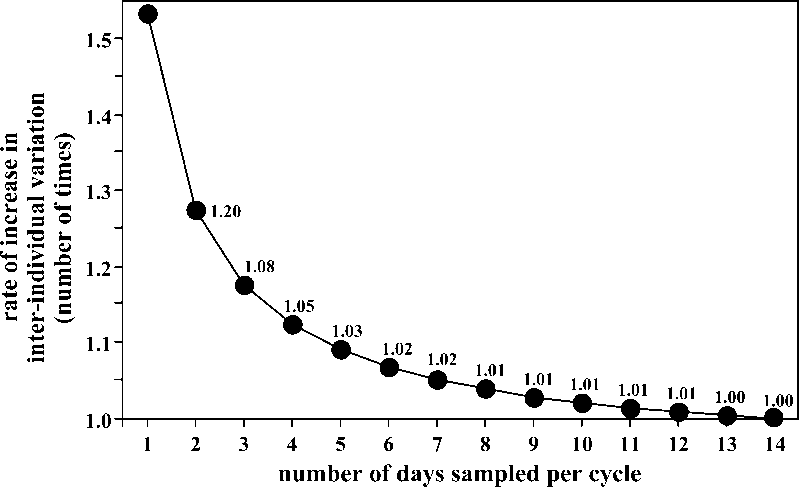 Interindividual variation as a function of the number of cycles sampled per each subject in the study. The number next to each Distribution of intracycle amplitudes of progesterone con- symbol shows how quickly interindividual variation decreases with centrations, computed as ratios of untransformed maximum and min- each additional cycle measured per woman, e.g. measuring 2 rather imum values recorded between days À1 and À14 (ﬁlled bars) and than 1 cycles reduces interindividual variation 1.12 times, and mea- between days À3 and À12 (open bars); n ¼ 114 cycles of 22 women suring 3 rather than 2 cycles reduces interindividual variation an additional 1.05 times. The analysis assumes that cycle means areevaluated reliably (minimum 7-8 days per cycle).
Number of cycles per woman for the assessment of the Fifteen analyses of variance based on only two cycle- months per woman yielded estimates of interindividualvariation (traditionally quantiﬁed by the intraclass corre-lation coefﬁcient, ICC) ranging from 0.04 to 0.87 (mean0.335). The estimates of ICC varied therefore widely (20-fold) and depended strongly on the choice of particularpairs of cycle-months, showing clearly that a sample oftwo cycles per woman is not sufﬁcient to capture naturalvariation among cycles (due in part to a seasonal lifestylein the studied population).
The increase in interindividual variation as a function of A bootstrap approach showed that an optimum number the number of days sampled per each cycle. The magnitude of of months to be sampled per woman in a seasonal rural increase was scaled with respect to the level of variation for the case population appear to be not fewer than four (Fig. 3). An in which all 14 days in the cycle have been measured (sampled). Thenumber next to each symbol shows how quickly interindividual varia- expected positive covariance across cycles of a single tion decreases with each additional day measured per cycle, e.g.
woman (who may tend to produce generally high or gener- measuring 2 rather than 1 day per cycle reduces interindividual vari- ally low levels of hormones) reduces the estimates of inter- ation 1.20 times, and measuring 3 rather than 2 days per cycle cycle variation and, therefore, means that fewer cycles per reduces interindividual variation an additional 1.08 times.
woman should be sampled, than without the intercycle co-variance. However, a pronounced seasonality of workloador dietary intake will probably reduce such intraindivid- nested design (‘ interindividual’’ and ‘‘intercycle within women’’) together accounted for only 35.5% of total var- In terms of the actual difference in the magnitude of iance (Table 2). Among the 114 computed measures of interindividual variation, sampling of just two rather within-cycle amplitude (pooling all measured cycles from than six cycles per woman entails about 10% rise in varia- 22 women), values ranged from 2.2 to 22.7 times (n ¼ 114, tion, resulting in a 10% reduction of effect size and a con- mean 6.37, median 4.90), which means that during some sequent rise in the probability of Type II error (Cohen, cycles progesterone concentrations varied almost 23-fold 1988). Sampling three versus six cycles leads to a 5% (Fig. 4, ﬁlled bars). Using conservatively only days À12 to lower effect size. Importantly, we may assume that the À3 of the luteal phase (thus excluding potentially very low sample size requirements for nonseasonal populations are hormone levels), the within-cycle amplitudes ranged from easier to fulﬁll and even a single cycle per woman would 1.7 to 13.8 (mean 4.18, median 3.58) (Fig. 4, open bars). In be sufﬁcient to provide adequate statistical power. How- the group of 185 urban and rural women, the within-cycle ever, this liberal conclusion is contingent upon the use of amplitudes of progesterone concentrations (for days À14 to full hormonal proﬁles, rather than single-day snapshots À1) ranged from 2.2 to 49.3 times (mean 8.29, median 6.20). These results underscore the importance of sufﬁcientsampling of progesterone concentrations during individualcycles, especially during the luteal phase of the cycle.
Number of days per cycle for the assessment of the Resampling analyses performed on data from the rural and urban populations suggest that the requirements for The intracycle (among-days of a single cycle) variability a reliable assessment of progesterone production are quite in progesterone levels constituted the largest source of stringent: at least 7 or 8 days per 14-day luteal phase of variation in our data: the residual component accounted the cycle should be measured (Fig. 5). The sampling of for 64.5% of total variance, while the two levels in the fewer than 5 days per cycle increases the level of variation American Journal of Human Biology DOI 10.1002/ajhb