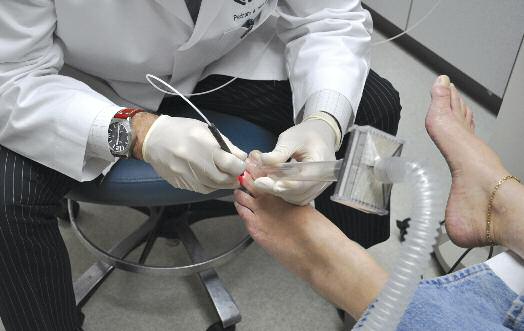 THE PATHOLASE PINPOINT™
FOOTLASER™
The Newest and Safest Treatment in the Fight against Toenail Fungus
BY PEDRAM HENDIZADEH D.P.M., F.A.C.F.A.S.
Have you ever suffered from toenail fungus? Are you embarrassed to go to the nail salon or go to the beach with friends or family al because of the appearance of your nails? Have you tried med- ications, only to be frustrated when nothing works? If so, laser therapy Onychomycosis, most commonly known as a chronic toenail fungal infection, can be very difficult to treat as it grows extremely slowly. The fungal organism that is the source of the problem can only be kil ed dur- ing its growth phase. That is why it can be very frustrating for many der- matologists and podiatrists to treat toenail fungus. SignS and SymptomS
Fungal infections can go unnoticed for long periods of time because there may be no initial discoloration or pain. The infection is a mold that typical y occurs when the toenail is exposed to a dark, warm, moist 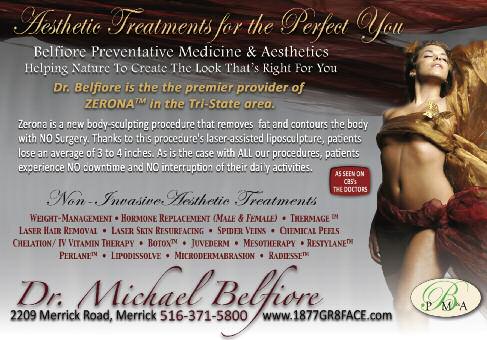 environment. A fungal nail infection that is persistent monly used in the 1960s and 1970s as a first-line treat- or becomes painful should be treated. Otherwise, it can ment for fungal infections. However, due to a significant cause problems and potential y impact the function of liver toxicity, it quickly fel out of favor. In the 1980s, top- the entire foot. The fungus breeds underneath the ical antifungal medications were frequently used, growing portion of the nail and can occasional y pene- though these had limited success (less than 10%). In the trate through the surface of the nail. Studies have mid-1990s, oral medications such as terbinafine and shown health-related quality-of-life issues associated itraconazole were used. These newer agents had the with onychomycosis, and it is clear that patient treat- ment is both necessary and desirable.
A fungal infection is diagnosed by its appearance – THE LASER, WHICH IS NOW
a thickening and discoloration of the nail plate as wel as FDA-CLEARED FOR THE TREATMENT
a possible foul odor. As the nail thickens, it may lift from the nail bed (onycholysis). Other symptoms include brit- OF NAIL FUNGUS, IS A SPECIALLY
tleness, chronic in-grown toenails, and debris under the nails. In some forms of fungal nail infections, a black or white, powdery discoloration may appear on the sur- SHINES THROUGH THE TOENAIL AND
VAPORIZES THE PATHOGENS EMBED-
Toenail fungus can become debilitating, interfering DED IN THE NAIL BED AND NAIL PLATE
with walking and causing pain from shoe pressure. If the infected toenail is left untreated, further complica- tions may occur. In some cases, the nail can break away advantage (over griseofulvin) of reduced toxicity and a from the underlying skin (the nail bed), al owing the shorter duration of therapy. However, results were fungus to spread to other parts of the foot. Although moderate (approximately 55-65% improvement) and the degree to which the infection spreads varies from liver toxicity was stil an issue. Similar to griseofulvin, person to person, it is best to identify and treat the terbinafine and itraconazole are stil in use today, de- treatmentS
LaSer treatment
Many treatment modalities have been used over Today, there is a new treatment that has been ex- the years. First isolated in 1939, griseofulvin was com- tremely beneficial in the fight against fungus - The

PathoLase PinPoint™ FootLaser™. This breakthrough technology was introduced nearly 2 years ago and has shown significant success in the treatment of chronic fungal infections. PathoLase, the company that de- veloped this light-based procedure, claims an 88% success rate. The laser, which is now FDA-cleared for the treatment of nail fungus, is a special y designed, patented device that shines through the toenail and vaporizes the pathogens embedded in the nail bed Upon first hearing of this technology at the 2008 American Podiatric Medical Association Annual Con- ference, I was immediately interested, especial y be- cause there were no other effective treatments available at the time. I was, to say the least, a little skeptical of its efficacy as none of the other treat- ment modalities have worked wel thus far. A close col eague of mine first began using the laser in Sep- tember 2008. He advised me that the procedure worked wel . I asked to see the results after 3-4 months, as it takes several months for the nail to completely grow out. In December 2008, he in- formed me that the procedure was very successful in treating some of the worst cases of fungal nail infec- In early 2009, we brought the laser to the Long Island area as wel as to our Connecticut offices and have performed the procedure on over 430 patients.
We have seen a significant number of happy and very satisfied patients – patients who have been frustrated throughout the years. They found this modality the only effective means in the treatment of their debili- tating and cosmetical y unappealing condition. This PathoLase PinPoint™ FootLaser™ is safe, pain-free and performed in one treatment with no need for drugs or anesthesia. This state-of-the-art premiere treatment therapy uses a laser that passes directly through the nail to target the precise infec- tion site. As the laser passes through the nail, it iden- tifies and destroys the pathogens that cause the fungus. The laser does not harm the nail or sur- rounding skin in any way. Fol owing this procedure, the toenail wil eventual y grow back new; clear, The entire procedure takes approximately 30- 45 minutes and is performed in the comfort of our of- fice. Approximately 85% of my patients that I have performed the procedure on have been extremely satisfied after one treatment. We have seen such great results that we now have two lasers in our group. Only a smal percentage of the patients have needed a second treatment in an attempt to get rid of a stubborn fungal infection. In my experience, over- al this is the best treatment to date for this unsightly Feel free to do more research on this topic at www.Greatfootcare.com and www.LIfootcare.com.
You can also visit www.PathoLase.com for more in- formation on this innovative technology. image

In her recent article “Making Matters Worse” Lynne Cheney pointed out that much of education today is student-directed, allowing students to create their own meaning from what they are trying to learn. This article will discuss the fallout and results of this educational philosophy as it applies to reading comprehension. Most schools today claim to teach phonics, and initial results seem to i