Understanding
Indigestion
and Ulcers
Professor C.J. Hawkey and Dr N.J.D. Wight Published by Family Doctor Publications Limitedin association with the British Medical Association IMPORTANT
This book is intended not as a substitute for personal medical advice but as a supplement to that advice for the patient who wishes to understand more about his In particular (without limit) you should note that advances in medical science occur rapidly and some information about drugs and treatment contained in this booklet may very soon be out of date.
All rights reserved. No part of this publication may be reproduced, or stored in a retrieval system, or transmitted, in any form or by any means, electronic, mechanical, photocopying, recording and/or otherwise, without the prior written permission of the publishers. The right of Professor C.J. Hawkey and Dr N.J.D. Wight to be identified as the authors of this work has been asserted in accordance with the Copyright, Designs and Patents Act 1988, Family Doctor Publications 1999–2006 Family Doctor Publications, PO Box 4664, Poole, Dorset BH15 1NN ISBN-13: 978-1-903474-46-9
ISBN-10: 1-903479-46-9

Professor C.J. Hawkey is
Professor of Gastroenterology
A very common symptom
Virtually everyone has had indigestion at some time, and for most people it’s simply a minor nuisance. More often than not, it happens when you’ve overindulged in food or alcohol or eaten something that doesn’t agree with you, and it lasts for only a relatively short has worked in many hospitals inEngland treating and researching In these situations, you can either wait for the symptoms to subside or treat yourself with a remedy Dr N.J.D. Wight is a specialist
from the pharmacist without needing to see a doctor. For some people, however, the symptoms can be persistent and so severe that they interfere with everyday life. They may be caused by some undiagnosed problem within the digestive system that needs to be properly identified and, if necessary, treated by a This book will help you distinguish between minor symptoms that you can safely treat yourself with theadvice of a pharmacist and those that need furtherinvestigation. The word ‘indigestion’ means different things to • If your indigestion does not get better with simple different people, but mostly it is used to describe over-the-counter remedies, you should make a discomfort in the central upper abdomen related in some way to eating or swallowing. Other commonsymptoms include: Whether or not to see your GP is discussed in detail onpages 13–15. Remember, if self-help doesn’t work, or if you are worried, it is always best to see your GP.
• a burning sensation in the chest (heartburn) often linked with food or liquid coming up into the throat KEY POINTS
or the back of the mouth (known medically asgastro-oesophageal reflux) • belching or burping gas or wind into the mouth.
affecting most people at some time intheir life Treating indigestion
If you get such symptoms only occasionally, you should ask your pharmacist about over-the-countertreatments, which can be used safely to treat the odd bout of indigestion. You should also read the section in this book on lifestyle changes (see page 16) and makeany necessary changes to reduce your chances of ■ This booklet will help you to treat yourself further attacks. Simple measures like these will usually and also help you decide if it is necessary be all that is needed to solve your problem, but in certain circumstances it is best to see your GP: • If you have difficulty swallowing, unintentional weight loss, abdominal swelling, persistent vomitingor vomiting blood, you should make an urgentappointment to see your GP.
• If you have indigestion and are taking certain types of drugs, either prescribed or bought from thechemist, you should make a routine appointment tosee your GP (the types of drugs that may causeindigestion are described in detail on pages 72–4). 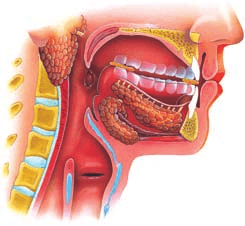 The structure of the mouth
The tongue, teeth and saliva work together to start the process
of digestion. There are three pairs of salivary glands that aid the
tasting, chewing and swallowing of food.
How the digestive system works
Many people sometimes have only a vague idea of the size, shape, position and function of the stomach andother digestive organs. This section of the book gives abrief outline of the normal process of digestion andwhat each of the main parts of the digestive systemdoes. If this is all familiar to you, just skip this account and move straight on to page 10, where the maintypes of indigestion are described.
To extract nutrients from the food that we eat we need to digest it. First the food has to be changed into a liquid or semi-liquid form. Then, complex substancessuch as fats and proteins have to be broken down into move food round your mouth to chew it, and it also smaller chemical units that can be absorbed through contains an enzyme called salivary amylase that starts the walls of the intestine into the bloodstream. to digest carbohydrates such as sugars and starches. It is slightly acid and, when you’re not actually eating, The mouth
it goes on being produced and helps to keep your The process of digestion begins in your mouth, where mouth and teeth clean and stop plaque developing on the teeth and tongue chop large pieces of food into your teeth. People who have conditions in which smaller ones. The salivary glands release saliva into the salivary production is reduced often experience a dry mouth to mix with the food. Saliva makes it easier to mouth, difficulty swallowing and increased tooth decay. 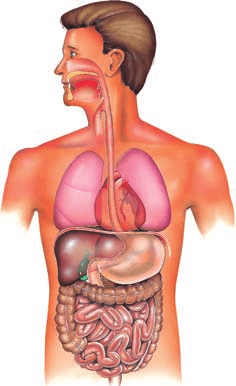 The stomach and intestines
The major abdominal organs and digestion
Once the food is chewed and softened in the mouth, Ingested food passes down the oesophagus and into the the tongue pushes it to the back of the throat, where stomach, where it is churned and mixed thoroughly withdigestive juices secreted by the stomach lining. Further digestive muscles propel it down the oesophagus (or gullet). The enzymes are added to the food in the duodenum.
food passes from the oesophagus into the stomachthrough a muscular one-way valve, the lower oeso-phageal sphincter, which prevents the contents of thestomach from being forced back into the chest whenthe stomach contracts or when you lie flat. Functions of the stomachThe stomach is a muscular J-shaped sac that forms thewidest part of the digestive tract. It has three main 1. It acts as a storage container, so that within a
few minutes we can swallow all the food needed 2. It plays a large part in the physical and chemical
processes of digestion. Food in the stomach is churned and crushed, although you notice thisonly when the activity is excessive because yourstomach does not contain the same number ofsensory nerves as other parts of the body, such as the skin. Glands within the stomach lining produce a powerful acid and enzymes that helpbreak down the constituents of food into simpler chemical compounds. The walls of the stomach are normally protected against acid attack by a layer of protective mucus, but, if this is reduced or damaged, it may lead to ulcer formation. Theoesophagus doesn’t have this protective liningand so is more easily damaged by acid.

Some things you need to know about… DONATING BLOOD Basic Eligibility To give blood, you must be in generally good health, weigh at least 110 pounds and be at least 17 years of age or 16 years of age with parental consent. Medication Piercings/ Tattoos Waiting time for: You may be accepted as a blood donor if you have had a Antibiotics—trea