http://www.eps1.comlink.ne.jp/~mayus/eng/ Commercial cows’ milk has estrogenic activity as revealed
by the hypertrophic effects on the uteri of young
ovariectomized rats and immature rats
Ganmaa D, Tezuka H, Enkhmaa D, Hoshi K, Sato A. Commercial cows’ milk has uterotrophic activity on the uteri of young International Journal of Cancer 2006;118:2363-65. Abstract
Cows’ milk has considerable amounts of estrogens, mainly in the form of estrone sulfate. To determine whether the commercial milk has any biologically significant hormonal effects, two series of uterotrophic tests were performed, one with young ovariectomized rats and the other with sexually immature rats. Thirty-six rats were used for each test. They were divided into 3 groups of 12 animals each, and were kept for 7 days on powdered chow with one of three drinking solutions: low-fat milk (experimental), artificial milk (negative control), or artificial milk containing estrone sulfate at 100 ng/ml (positive control). At autopsy, both the wet and blotted uterine weights were measured. The cell heights of uterine epithelia in ovariectomized rats were also determined. In each test, the weights of the uteri in the Low-Fat Milk group were significantly greater than those of the respective weights in the Artificial Milk group (p<0.01). Furthermore, in ovariectomized rats, the uterine epithelial-cell height in the Low-Fat Milk group was significantly greater than that observed in the Artificial Milk group (p<0.01). The uterotrophic effect of 100 ng/ml Estrone Sulfate solution was greater than that of Low-Fat Milk in immature rats (p<0.01), whereas the effect of the solution was almost comparable to that of Low-Fat Milk (p>0.05). In conclusion, commercially available low-fat milk has uterotrophic effects in both young ovariectomized rats and sexually immature rats. Introduction
Cows’ milk contains considerable amounts of estrogens (estrone, estradiol-17β and estriol) (1). Because of modern dairy practices, 75% of commercial cows’ milk come from cows during pregnancy, when the estrogen levels in their blood, and hence in their milk, are elevated (2). The hormone levels in milk exceed those in blood, probably owing to hormone The major estrogen in milk is estrone sulfate (4), which when consumed can be readily converted to estrone or estradiol-17β (5). Because of its hydrophilic nature, this main conjugate can be easily absorbed from the gastrointestinal tract. Quantitatively, estrone sulfate is the most important blood estrogen (6,7). Exogenously administered estrone sulfate has been shown to stimulate mammary tumor growth (8,9). To determine whether the cows’ milk on the market has any biologically significant hormonal effects, two series of uterotrophic assays were performed, one with ovariectomized young rats and the other with sexually immature female rats. Materials and Methods
The low-fat (1%) milk in this study (Holstein milk sterilized at 130 ºC for 2 sec) was the same one as that was used previously in the mammary carcinogenesis study (9). The artificial milk, which was used as a negative control solution, contained the same amount of protein (gluten fortified with lysine, DL-methionine, threonine and valine), fat (coconut oil) and carbohydrate (dextrin maltose) as the low-fat milk. The composition of the artificial milk has been described elsewhere (9). A solution of estrone sulfate in the artificial milk (100 ng/ml) was used as a positive control solution. The estrone sulfate (3-hydroxyestra-1,3,5(10)trine-17-one) was obtained from Sigma Chemical Company (Tokyo, Japan). The care and use of laboratory animals followed the Guidelines for Animal Experiments of the Medical University of Yamanashi. Ovariectomized rats
Female Wistar Galas Hannover rats, ovariectomized at 6 weeks, were purchased from Nippon Clea (Tokyo, Japan). Upon receipt, the rats were housed, 3 per polycarbonate cage, inside an air-conditioned animal room (22±2 ºC) with artificial lighting from 06:00 to 18:00 hour; the rats were provided with a diet of powdered chow (CE-2, Nippon Clea) and water. After a week of acclimatization, the rats at 8 weeks of age were weighed, numbered and randomly assigned to 3 groups of 12 animals each. Each group was then maintained on the powdered chow plus one of the three test solutions as the only drinking fluid: low-fat milk (LFM, esperimntal); artificial milk (AM, negative control); or artificial milk containing estrone sulfate at 100 ng/ml (ES, positive control). Food and liquid solutions were renewed daily at 10:00 hour. Daily consumption was determined as the difference between that which was provided and that which remained unconsumed at 10:00 hour the next day. The consumption was recorded in grams per cage (3 rats) per day. Body weight was measured every day, starting just prior to the change of dietary regimen. Immature rats
Thirteen-day-old female Wistar Galas Hannover rats were obtained from Nippon Clea (Tokyo, Japan) as litters accompanied by the dam or a foster dam. Upon receipt, the rats 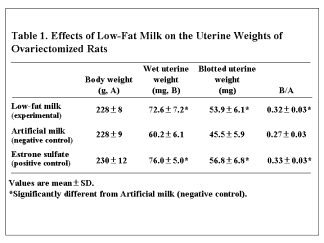 were housed, one per polycarbonate cage, in the same air-conditioned animal room described above and were provided with powdered chow and water. When the baby animals reached 17 days of age, they were weighed, numbered, and assigned to one of the three groups (LFM, AM or ES), which each consisted of 12 rats. The immature female rats were then treated essentially as described above for the ovariectomized rats, excepting that the vaginal opening Autopsy
After being maintained on the test liquids for 7 days, the animals were killed by ether inhalation at 16:00 hour, ~24 hours after the last treatment. The uteri were dissected free from adhering fats, and the wet uterine weights were recorded to the nearest 0.1 mg. Then, the tip of each uterus was cut, and the uterus was place on filter paper and gently pressed to blot the fluid. The blotted weights of the uteri were recorded. The cell heights of uterine epithelia in ovariectomized rats were determined on HE-stained sections using a microscope (Olympus BX 50, Tokyo, Japan) with an attached image analyzer (Nippon Digital, Tokyo, Japan), according to Newbold et al. (10). Statistical analysis
All data were analyzed by ANOVA using SPSS (SPSS Inc., Chicago, IL), followed by Dunnett’s multiple comparisons test, when significant differences existed among groups. The 0.05 level of probability was used as the criterion of significance. Ovariectomized rats
Body weights were comparable among the three groups (Table 1). Both wet and 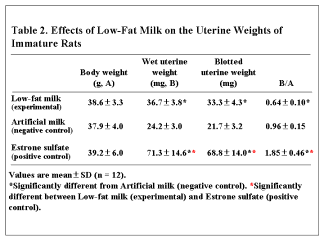 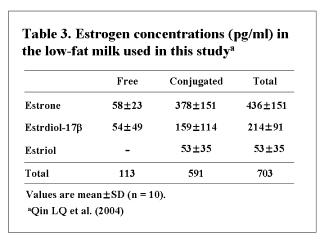