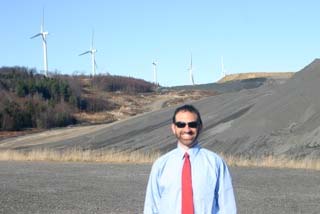 After Five Years, Director Malcolm Woolf Bids Farewell to MEA http://us2.campaign-archive1.com/?u=99d15dabd36222ae3312ac178&id.
After Five Years, Director Malcolm Woolf Bids Farewell to MEA.
It's hard to leave the best job youever had. Looking back at my lastfive years at MEA, I am proud of theremarkable progress we have made. Governor O'Malley deservestremendous credit for his vision of asustainable, prosperous Marylandpowered by clean energy - and hiswillingness to fight even when itwasn't politically expedient. Wecouldn't have made the advances we have without a vibrant community committed to clean energy solutions. Because of ourcollective efforts, Maryland has cemented its reputation as one of the top clean energystates in the nation. One of the joys of working in the O'Malley Administration is the ability to take an idea fromconception to flip-the-switch reality. MEA's unofficial motto is "Smart investments, realresults." In parting, I offer my top 10 list of the "real results" we achieved together duringmy tenure at MEA: 1. Widely Recognized As One of the Leading Clean Energy States in the Nation
In 2007, Maryland was ranked 47th in the nation in term of investments in energy
efficiency. Today, Maryland is routinely included as one of the "Top 10 States for Energy
Efficiency by the American Council for an Energy Efficient Economy." We have also been
After Five Years, Director Malcolm Woolf Bids Farewell to MEA http://us2.campaign-archive1.com/?u=99d15dabd36222ae3312ac178&id.
recognized as a "Top 10 State for Solar by the Solar Energy Industries Association," and
Baltimore is one of Ford Motor Company’s top 25 EV-ready cities. By all measures,
Maryland has cemented its reputation as a national leader.
2. Saved Marylanders Billions Through the EmPOWER Maryland Energy
Efficiency Act
Measures already installed through the utility and MEA's EmPOWER Maryland programs
will save Marylanders more than $2.6 billion in lifetime energy costs. During the 2012
fiscal year alone, EmPOWER initiatives supported more than 2,000 jobs.
3. Helped Keep the Lights On
As a result of EmPOWER Maryland and related demand side management efforts,
Maryland has reduced energy per capita peak demand by more than 9 percent, while
increasing Maryland’s demand resources by more than 1,600 MW. That’s the equivalent of
10 fossil-powered peaking plants.
4. Drove More Than $1 Billion in New Investment as a Condition of Exelon
Merger
MEA led the State’s successful negotiations in the Exelon/Constellation merger that will
infuse Maryland with more than $1 billion in clean energy investments while creating more
than 6,000 jobs.
5. Leveraged $320 Million in Private Investment for Utility-Scale Renewables
Without State Funds, Resulting in a Harvard Top 25 Innovations in American
Government Award
The Generating Clean Horizons Initiative used public/private partnerships to build 78 MW
of new solar and wind energy generation. These three projects -- the 17 MW solar array in
Emmitsburg and two wind farms in western Maryland and West Virginia -- jump-started
Maryland's utility scale renewables market. The initiative was recognized by Harvard’s
Kennedy School of Government as one of the "Top 25 Innovations in American
Government."
6. Enabled Dramatic Growth in Maryland’s Solar Installation Industry
Maryland had less than 0.1 MW of solar installed at the end of 2006. Today, it has more
than 70 MW installed, and is on track to break the 100 MW mark this calendar year.
Thanks to aggressive solar energy policies that made the growth possible, Maryland now
supports more than 2,000 well-paying solar installation industry jobs, up from practically
zero just a few years ago.
7. Helped Make Maryland’s First Two Utility-Scale Wind Farms A Reality
Maryland's first two utility-scale wind projects came online in 2010. Built in Garrett
County, the two large-scale wind farms generate 120 MW of clean, renewable power, cost
$240 million to build, employed more than 200 people during construction, and created

After Five Years, Director Malcolm Woolf Bids Farewell to MEA http://us2.campaign-archive1.com/?u=99d15dabd36222ae3312ac178&id.
20 permanent, on-going jobs.
8. Leveraged Limited Funds to Help Almost 8,000 Maryland Families Install
Solar, Wind, and Geothermal Systems
In 2007, few Marylanders were interested in MEA’s clean energy grant program. Yet in
recent years, we have been overwhelmed by public demand that far exceeded our budgeted
resources. By carefully managing our funds and proactively altering our grants, MEA
managed to avoid the boom and bust cycles that have plagued other states.
9. Laid the Foundation for an Advanced Energy Economy
Through enactment and aggressive implementation of the EmPOWER Maryland Energy
Efficiency Act, the Renewable Portfolio Standard, the Strategic Energy Investment Fund
and the Greenhouse Gas Solutions Act, Maryland has established the fundamental pillars
needed for a sustainable, clean energy future.
10. Built the Best State Energy Office in the Nation
Team MEA is unique. Its staff members are passionately committed to the agency’s
mission, and their dedication, innovation, and relentless drive for results leads to long
hours, a heck of a lot of fun, and the best state energy office in the nation.
During this wonderful five year sprint, it has truly been an honor and privilege to work with
each and every one of you, including the staff of MEA, Maryland legislators, innovative
business owners, and all of the citizens across the State working to ensure Maryland's
energy future. I have every confidence that Maryland will continue to lead the nation in
advancing affordable, reliable, and clean energy. I look forward to our paths crossing
again in the near future.
follow on Twitter | forward to a friend Copyright 2012 Maryland Energy Administration, All rightsreserved. unsubscribe from this list | update subscription preferences

Thematic report on protected areas or areas where special measures need to be taken to conserve biological diversity Please provide the following details on the origin of this report. Contracting Party: National Focal Point Full name of the institution: National Commission for Wildlife Conservation and Development (NCWCD) Name and title of contact officer: Prof Abdulaz