Case Report
Received: December 17, 2001Accepted: February 24, 2002 Meyerson Phenomenon within a
Nevus flammeus
The Different Eczematous Reactions within Port-Wine Stains
Key Words
on the anteromedial aspect of the left lower localized to the neck and face. They are rare- leg (fig. 1). Further physical examination re- ly found in the context of a Klippel-Trenau- vealed no other skin abnormalities. The pa- nay syndrome [3]. The pathogenesis of this tient does not have any varicose veins. The investigation with color duplex sonography (Sonoline Versa Pro®, Siemens, Linear Ar- Abstract
first time a papulosquamous halo dermatitis ray 5,0L45) did not reveal any insufficient overlying pigmented nevi. Unlike the more perforating vein under the nevus flammeus.
tions overlying nevi flammei exist. All of frequently observed halo nevus or nevus Sut- On histological examination focal acantho- ton, the nevus remains unchanged after the sis, parakeratosis and spongiosis were found scription of an eczematous reaction within a overlying some capillary ectasias. There was congenital nevus flammeus on the left lower 1988, Nicholls and Mason [5] proposed the no inflammatory infiltrate (fig. 2). Topically leg of a male adult gives reason to discuss eponym ‘Meyerson’s nevus’. Since then, this, also called ‘Meyerson phenomenon’ [6], has eczema within 2 weeks. Until today no re- rarely been seen in relation with other skin may mostly be a collision dermatosis with tumors [7, 8]. In those cases, the pathogene- an atopic dermatitis, especially when they arise in children and are localized to the neck Discussion
and face. When they are observed within a reported who developed an eczematous reac- grossly visible vascular malformation, as for tion within a congenital nevus flammeus on his left lower leg. A possible relation between vascular structures are common. They most- drome, they may have a pathogenesis simi- this observation and the Meyerson phenom- ly arise as stasis dermatitis from varicose lar to stasis dermatitis. In rare cases, an veins. They can electively be located to der- mal varicose venectasias, but are more often less circumscribed. Histological examina- cism and is interpreted as a variant of the Case Report
tion shows either a subacute or chronic der- matitis with hemosiderin scattered through the dermis, and the dilated vessels are em- bedded in a fibrotic dermis [9]. The patho- flammeus on his left lower leg for 1 year. He genesis of stasis dermatitis is not yet com- Introduction
hardly complained about itchiness. His per- sonal medical history was uneventful. There All the recently reported cases involving was no history of eczema or allergy. Physical matory or eczematous skin changes limited examination revealed a brown reddish area, flammeus, occurred in children [1–3]. They to the area of port-wine stains or congenital about 12 cm in diameter with a pronounced are mostly localized to the neck (otherwise nevi flammei [1, 2]. These observations are and scaly margin, within a nevus flammeus also called salmon patch of the midline) and Tel. +41 56 427 27 22, Fax +41 56 427 00 12, E-Mail [email protected] 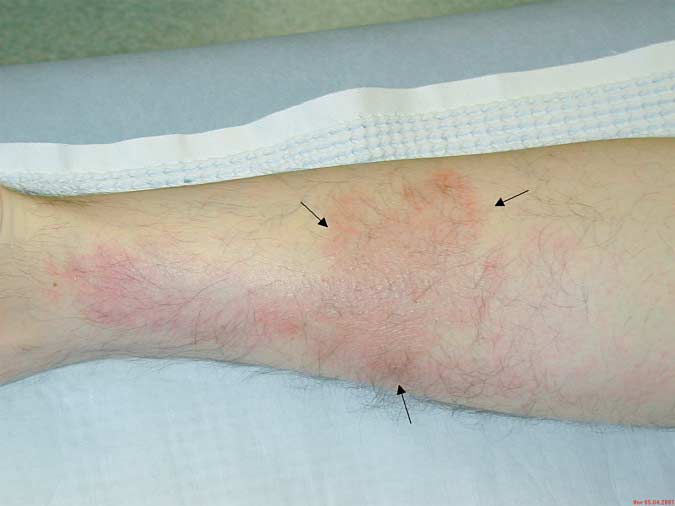 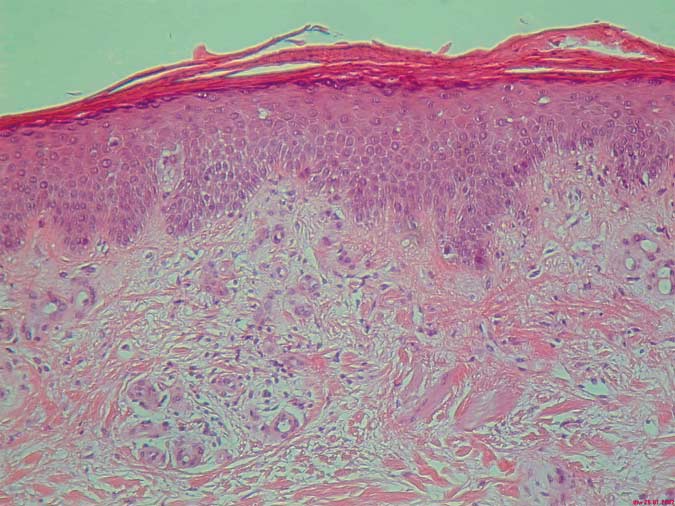