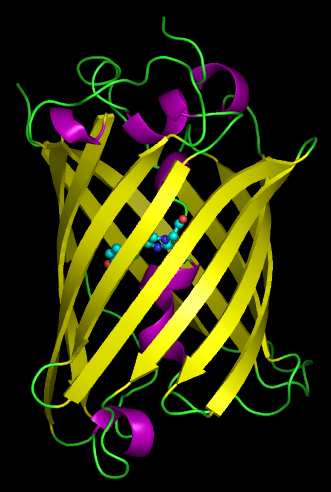 Green fluorescent protein (GFP) originally was isolated from the jellyfish Aequorea victoria
and it exhibits bright green fluorescence when exposed to blue light. Nowadays, GFP is one of the most commonly used tool in molecular biology, medicine, and cell biology. GFP is used as a biological marker and it is particularly useful due to its stability and the fact that its chromophore is formed in an autocatalytic cyclization that does not require a cofactor. This has enabled researchers to use GFP in living systems, and it has led to GFP’s widespread use in cell dynamics and development studies. In cell and molecular biology, the GFP gene is frequently used as a reporter of expression. In modified forms it has been used to make biosensors, and many animals have been created that express GFP as a proof-of-concept that a gene can be expressed throughout To date, the GFP gene has been introduced and expressed in many bacteria, yeast and other fungi, fish (such as zebra fish), plant, fly, and mammalian cells, including human. This lab course mainly includes eGFP (enhanced green fluorescent protein) expression in E.coli Aequorea in daylight at sea (left), and when stimulated in a darkroom (middle); Green fluorescent 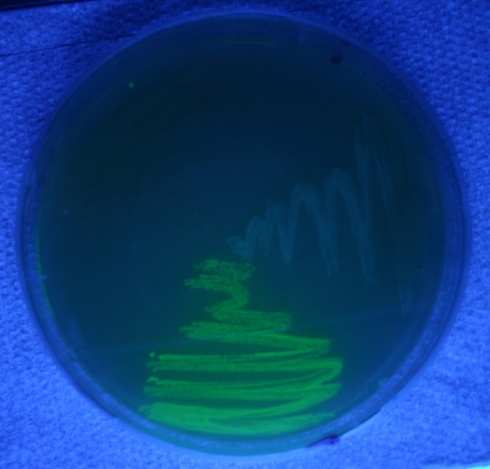 Praktikum Biotechnologie 1. Übung Blatt 2/6 GFP-variants
The fluorescence of GFP is due to a unique covalently-attached chromophore which is within the protein upon cyclisation and oxidation of residues Ser65-Tyr66-Gly67. The environment in the vicinity of the fluorophore can explain the fluorescence and behavior of existing mutants of GFP. Most of the polar residues in the pocket form a hydrogen-bonding network on the side of Tyr66. Atoms in the side chains of Thr203, Glu222, and Ile167 are in van der Waals contact with Tyr66. The mutation of these residues has direct steric effects on the fluorophore. Mutation also changes the electrostatic environment if the charge is changed. Furthermore, mutated residues near the fluorophore have direct effects on the absorption and emission spectra. Some mutations have significant wavelength shifts and most suffer a loss of fluorescence intensity. In this experiment, a mutation of Tyr 145 to Phe145 (Y145F) is initially carried out. Further site-directed mutagenesis of Tyr 66 to His 66 is carried out. Due to these substitutions, the protein shows a blue fluorescence (eBFP). Praktikum Biotechnologie 1. Übung Blatt 3/6 Used Materials
• 1000X Ampicillin (Aliquot are provided)
100mg/ml ampicillin sodium salt in deionised water. Sterilize by sterile filter. Store in aliquots in -20°C freezer. • LB-AMP media (Plates are provided)
1 litre of distilled water. Adjust PH- 7.5. Cool the Agar media to about 60 degree and add 1ml of 1000X Ampicillin. Pour the media on to petri dishes. • SOC media (Aliquot are provided)
Make up the total volume to 1000 ml with ddH2O. Adjust pH to 7.0 using 10M NaOH, autoclave and add 20 ml of Sterile 1M glucose before use. • Used Primers
Praktikum Biotechnologie 1. Übung Blatt 4/6 PROTOCOL
Site Directed Mutagenesis
PfuS Two-step PCR
1. Setup on ice in a 0.2 ml tube the PCR mastermix for the forward or reverse primer
reactions according to the table below. Thaw all the non-enzyme components at room temperature, mix by short vortex and collect by short centrifugation. Mastermix (46 µl for a final of 50 µl):
2. Transfer 23 µl from the Mastermix to another 0.2 ml tube. 3. To one of the tubes add 2 µl Y66H-F (forward primer; 5µM) and to the other tube add Start PCR step 1 (Number of cycles: 3)
5. Combine both tubes, mix and split again in two tubes(2X25µl). Praktikum Biotechnologie 1. Übung Blatt 5/6 Start PCR step 2 (Number of cycles : 20)
0.8% Agarose-gel
Cast an 0.8% Agarose-gel : mix 5µl of Gel Red with 50ml of 1X TAE running buffer . Mixture of 10µl of the PCR product and 2µl loading dye Mixture of 5 µl of empty vector and 2µl loading dye Agarose gel running conditions: 90V, 30min. Observe the gel under UV illumination in a gel station. Dpn I –Digestion
Add to the PCR-product (50µl), 1µl dpnI. Incubate overnight at 37°C.
Transformation
• Add 4µl (10 to 50 ng) of your PCR-product (p-eGFP Y145F + Y66H) to 100µl of • Add 2µl of pALXtreme-5b (empty vector) to 100µl of aliquoted E. coli DH5α strains. • Incubate mixtures on ice for 15 min. • Incubate tubes 40 sec at 42°C in water bath. Praktikum Biotechnologie 1. Übung Blatt 6/6 • Add to each mixture 0.9 ml SOC-medium and incubate 60 min at 37°C with 250 rpm. • Centrifuge at 16000g for 1min. Remove 800µl of the supernatant and resuspend the • Plate the 200 µl on LB-Amp plates. Incubate them at 37°C over night. Colony Analysis
Check LB Amp plates with UV-Light for positive colonies. Blue colonies are observed in the clones where site –directed mutagenesis (Y66H) on the eGFP-Y145F has been successful, and green colonies are observed when the template used in PCR has not been completely digest by DpnI enzyme.

Intrathecal Baclofen (Lioresal® and Gablofen®) 1. Continuation of intrathecal baclofen therapy: a. Medication must be requested by a neurologist or related specialist. (Prescription must be signed b. Must have severe spasticity of spinal or cerebral origin ( multiple sclerosis, cerebral palsy, spinal cord injury, or traumatic brain) which has proven unresponsive or ineffective