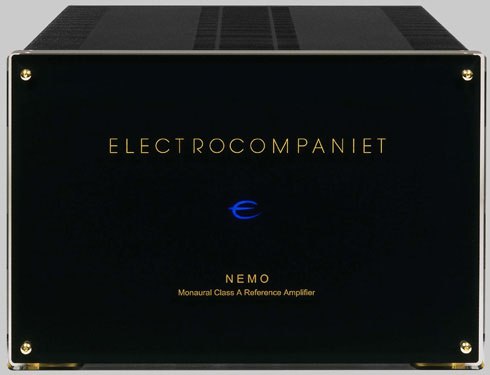 Cliché Me Baby!
So how do these puppies sound? Oh, I could wear out every last cliché in that Merriam Webster novella, but I'll start with the most obvious, powerful. The Nemos render a soundstage that is wide and deep, with plenty of headroom, particularly on live recordings. If you ever want to hear what a muscle amp like the Nemos can do with a dynamic speaker that can go down below 20 Hz effortlessly, look no further than French jazz vocalist Michel Jonasz' "La Temps Passe" from la fabuleuse histoire de Mister Swing [WEA 2292-42338-2 II]. This track from a live double CD features misseur Jonasz' fabulous vocals and some of the deepest bass ever produced from a synthesizer. The great Bobby Palkovic, of Merlin Audio, turned me on to this disc at the '95 SCES here in Chicago. He played it on an early version of his famed VSM loudspeakers via the Sim Audio Celeste 4150 amp. Anyone familiar with VSM will tell you that they are not the last word in bass reproduction, but the 150 Wpc Celeste sure coaxed a credible amount of bass out of them. Now consider what 600 watts of rompin', stompin' Nordic beast did through the Talons. To this day, my girlfriend will not allow me to play this disc in her presence. Want another apt cliché? Okay, how about transparent. The Ray Brown Trio's "Can't Help Lovin' Dat Man," from Summer Wind [Concord CCD-4426], is a splendid live performance that fill's my listening room with so much realistic presence that I'm often tempted to raise my hand to order an Absolut and tonic. Instruments are believably imaged against a pitch-black backdrop, making it easy to enjoy Gene Harris' crowd pleasing piano work. And, when I listen to "Monkery's the Blues" from the CD Carmen Sings Monk [Novus 3086-2-N], the Nemos portray Carmen McCrae's voice with the wide range of colors, tones and inflections that she is known for. The same can be said for Johnny Hartman's ultra-cool style on "Don't You Know I Care" from I Just dropped by to Say Hello [Impulse IMPD-176]. Hartman's voice is full and warm. Percussions sound detailed and dimensional. Admittedly, I haven't been a big fan of Classical music, but hearing "Exotic Dances" [Reference Recordings XXX] through the Nemos is quickly making me a convert. There are some other clichés that I could babble on about, but I'll spare you the drool. I'm not trying to say that the residents of Valhalla crafted the Nemos. They are certainly not without their flaws. For one, the stock power cords that come with the units are an embarrassment and not worthy of the build quality of amps costing nearly $15K. Second, amps of this bulk and weight need to have some sort of handle built in to the rear of them. And third, Electrocompaniet should do more to stress just how much better these amps sound after at least 100 hours of use. Believe me the difference is HUGE! Out of the box, the Nemos sounded a bit unsure of themselves. It took some time for them to realize the power they possessed in my system before they started kickin' ass and taking names. Conclusion
The Nemos have put me in a position where considering shelling out big bucks to buy another amp would be just silly. That's not to say that there is no better sounding amp out there. The virtues of the Bel Canto eVo 2 and the Halcro dm58 have been thoroughly expressed throughout the audiophile press. But it would be hard to imagine a system that would not be improved by the Nemo's performance, though I have yet to hear how they would sound on a pair of some of the better full-range electrostatics like say, the Quad 989 or Sound Lab Ultimate. Maybe I'll be able to answer that question at another time. Suffice it to say that I have given my system that little blue pill and it has given me a confidence that's gotten my coworkers asking, "Have you been working out?" "Did you get a haircut?" "Are you taking Viagra?"