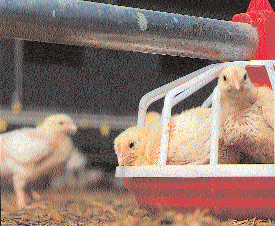 Pro and antibiotic
in sequence perform
well in broiler diet
A lot is known about the use of antibiotics as growth chicks were housed in an electric batterybrooder. Feed and water were provided ad promoters in broiler feed, but how do they perform in libitum throughout the experimental peri-od of seven weeks. The main ingredients of comparison to probiotics, and can they be combined. Research the feed is shown in Table 1. A premix sup-plied standard minerals and vitamins to the at Bidhan Chandra Agricultural University in India lifts a experimental birds at recommended levels.
The test diets were prepared by mixing 100 kg of feed with different growth promotersas per doses recommended by the respective By L.Mandal, S.K.Mandal, N.Baidya and S.K.Sarkar
manufactures. Thus, altogether there werefifteen diets, displayed in Table 2.
The birds were fed with starter ration (0- The use of feed additives as growth the manufacturers claiming their product(s) 28 days) followed by finisher ration (29-49
as the best. Moreover, the effect of com- days). At the end of experiment, four birds bined feeding of antibiotics and probiotics from each group were slaughtered to study world. Antibiotics and probiotics have suc- as also phase wise feeding of the same is the dressing characteristic and some haema- cessfully been used as feed additives in poul- very much limited. The object of the pre- tological parameters. Dressing percentage try rations with encouraging results. The sent investigation was, therefore, aimed at were noted by excluding liver, heart and giz- number of feed additives has increased so exploring the possibilities of using antibi- much so that the poultry farmers occasion- otics and probiotics either singly or in com- ally get confused by the advertisement of bination or on alternate weeks on the growth Statistical analysis of the data were done Test layout
The body weight gain as also FCR (Table 3) was found to be significantly better than control in T2, T4, T5, T10, T13, and T14. It tion that although certain antibiotics pro- while other antibiotics like Aurofac (T1), Table 1 - The basal portion of the reference diet
ingredients (kg/100kg).
Ingredients
Starter feed
Finisher feed
An antibiotic in the starter diet of broilers and a probiotic in the
finisher ration yields well and gives a good economic return.
18 FEED MIX Volume 8 Number 1 2000
Vetradox (T3) may not produce that goodresult. It became further clear that simulta- Table 2 - Test diets and their differing additives.
neous use of Aurofac and Biospur (T10)brings forth significantly better weight gainand FCR than the control but the combined Additive
Active ingredient
Dosage active
(commercial name)
ingredient/100kg
use was found to record only numericalimprovement than when either of them duced significantly better results. Amongst the antibiotic used, Flavomycin and Stafac performed much better while Stafac record- From the beneficial effects of antibiotics reduces the intestinal bacterial load, gut increase of intestinal alkaline phosphates performance. Probiotics, like Bioboost Forte (T7), Biospur (T8), G-Probiotic (T9) could not register statistically significant body weight tion of Biospur (T8) could not bring forth In sequence performs best
The results further indicated that the use of (T13) was the best performer in terms ofboth gain in body weight and FCR resultingin significant improvement in economicreturn per broiler. Conversely, the recipro- Table 3 - Effect of feeding antibiotics and probiotics on the performance of
cal use of Biospur to start with and Aurofac broilers (0-7 weeks)
in between (T14) could not bring forth thatgood result, although recording significantbody weight gain and FCR as compared to Treatment
Weight Feed
Dressing
control. Since the use of antibiotic and pro- gain (g)*
intake (g)
income/bird**
biotic (T13) on alternate week is difficult to be enforced by the feed manufacturers, the antibiotic Aurofac was tried in the starting phase (0-4th week) and probiotic in the fin- ishing stage (5-7th week T11) which also pro- duced comparable results in terms of both gain in body weight and FCR. However, the converse use of Biospur in 0-4th week and Aurofac in 5-7th week (T12) could not evince any good result as compared to control.
Conclusively, it is noted that the use of an antibiotic followed by a probiotic on alter- nate week (T13) produced the best result in terms of gain in body weight & FCR and most economic return per broiler followedby use of antibiotic in starting phase and probiotic in finishing phase (T11). This will ** Relative income after accounting for cost of feed and day old chicks.
Values bearing the same superscript within the same parameter do not differ significantly (P<0.05) the antibiotic in the finishing phase fromhuman health point of view. The data on dressing percentage (Table 3) as well as blood parameters (not in table) the most economic gain followed by use of did not show significant differences (P<0.05) Aurofac in the starting phase (0-4 week) and Biospur in the finishing phase (5-7 week, practical standpoint, however, the use of use of antibiotics and probiotics have had antibiotic in the starter ration and probiotic in the finisher ration will be most useful broilers. As for economic return per broiler, it was observed that the use of Aurofac on the use of antibiotic and probiotic on alter- alternate week with Biospur (T13) produced nate week starting with antibiotic in the 20 FEED MIX Volume 7 Number 1 2000

MEDICAL DRUG INTERACTIONS WITH STREET DRUGS A resource by and for drug users Compiled by Julie Klems, NEED (Needle Exchange Emergency Distribution, Berkeley, CA) This copy is made available for reference. The original is in zine format and can be purchased by contacting Julie at the address given in the booklet. Editorial Note: No clinical studies have ever been done on the interactions